In McFarlane v McFarlane [2021] VSC 197, the applicants mother had signed a transfer of land, gifting her home to her son, the applicant. She moved from the house to an aged care home shortly after, and the Victorian Civil and Administrative Tribunal appointed State Trustees Limited as her administrator, under Part 5 of the Guardianship and Administration Act 1986 (Vic). The administrator inquired into the circumstances surrounding the transfer of the property, commencing proceedings on her behalf, claiming that the transfer was procured by undue influence and was unconscionable, seeking an order that the transfer be set aside.

“He appeared briefly at the trial, to raise an objection to the Court’s jurisdiction.  I heard his objection, and then indicated that it had no basis, and that I would give written reasons for that conclusion at a later time.  I then began to outline the way in which the trial would proceed.  At that point, Mr McFarlane then purported to arrest me for misprision (concealment) of treason.  He said that a trial would be unconstitutional and that he did not want to be part of a treason.  I persisted in outlining the trial process.  After some interruptions and angry shouting, Mr McFarlane left the courtroom and did not participate further in the trial.”

“I understood Mr McFarlane’s objection to the Court’s jurisdiction to be that a past Attorney-General had removed the Queen’s commission from the Supreme Court of Victoria and that, since then, the operation of the Court had been unconstitutional and illegal.  He supported this argument by reading from a media release issued in 2009 by the then Attorney-General for Victoria, Rob Hulls, to the effect that criminal proceedings would in future be issued in the name of the Director of Public Prosecutions, rather than ‘the Crown’ or ‘Regina’.  Mr McFarlane had earlier provided my chambers with an extract from the Acts Amendment and Repeal (Courts and Legal Practice) Act 2003 (WA), which amended various Western Australian statutes by substituting ‘State’ for ‘Crown’. On that basis, he asserted that Mr Hulls had removed the Queen from her position and that the Court was operating illegally. He added that the concealment of that fact was misprision of treason.

The objection was misconceived.  Mr Hulls’ media release did not remove the Queen as the constitutional head of the State of Victoria.  It does not reflect the current naming convention in criminal proceedings in this Court, in which the prosecution is usually referred to as ‘R’ for Regina, the Queen.  It had no effect at all on the Supreme Court’s equitable jurisdiction, which is invoked by Mrs McFarlane in this proceeding.

The Constitution Act 1975 (Vic) still provides that the legislative power of the State of Victoria is vested in the Parliament of Victoria, comprising Her Majesty, the Legislative Council, and the Legislative Assembly. [s. 15]  The Crown is represented in Victoria by the Governor, who is appointed by the Queen. [s. 6]  The Supreme Court of Victoria consists of judges who are appointed by the Governor on the advice of the Executive Council. [ss 75, 75B(2)]  The Court has jurisdiction in or in relation to Victoria ‘in all cases whatsoever’ and is ‘the superior Court of Victoria with unlimited jurisdiction’. [s. 85]  Immediately before I took the affirmation of office as a judge, I affirmed my allegiance to Her Majesty Queen Elizabeth the Second and Her Majesty’s heirs and successors according to law. 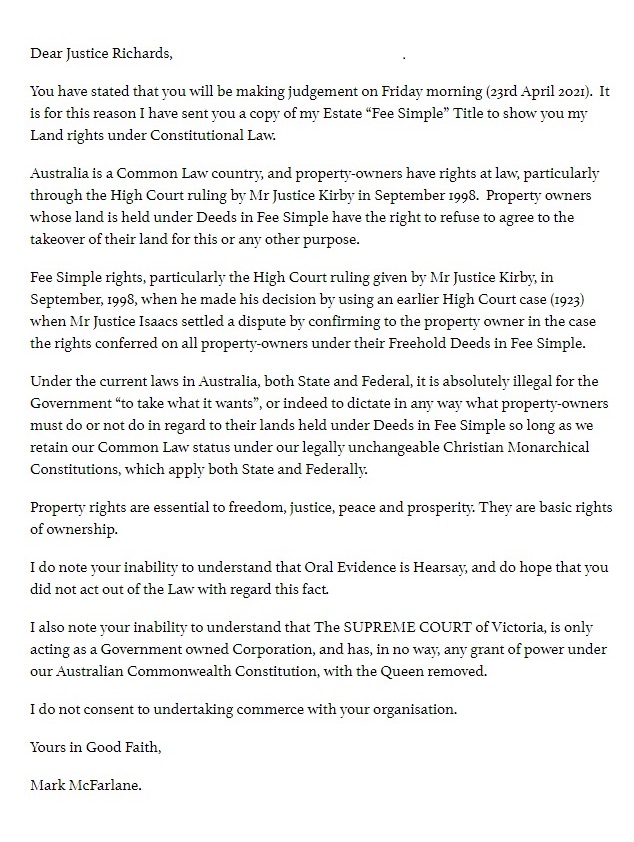 “As explained, there is no basis for Mr McFarlane’s contention that the Court is unconstitutional, or that the Queen has been removed.”