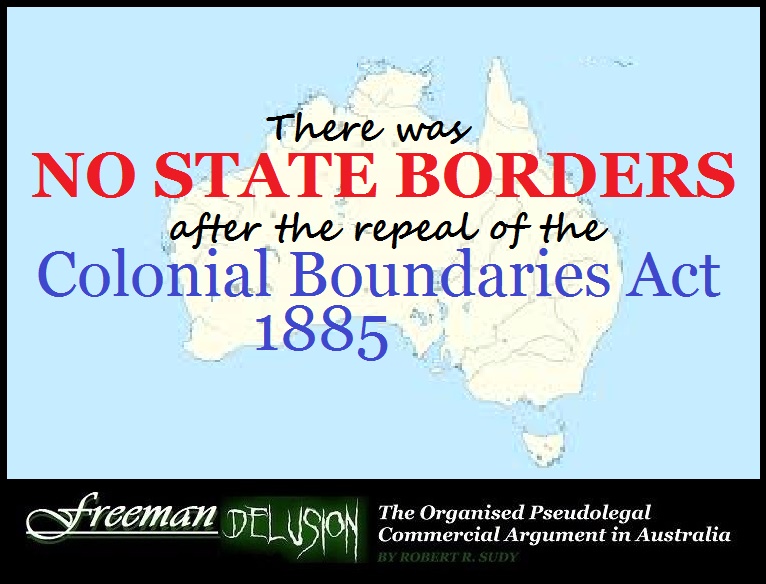 It is a common premise among some constitutional theorists in Australia such as Wayne Glew, that because the Colonial Boundaries Act 1895 was repealed at Federation, there exists no borders between States. One example of this can be found on page 60 and 63 in Steven Spiers “Realm and Man” where he states “…the repeal of the Colonial Boundaries Act 1875 removing any border from New South Wales as at Constitution on the 1st January 1901.” (Note the wrong date – it’s 1895 not 1875) On page 63 he explains this further:

Since federation, section 123 of the Commonwealth Constitution provides the only constitutional avenue for an alteration in State borders. It provides as follows: 2

“The Parliament of the Commonwealth may, with the consent of the Parliament of a State, and the approval of the majority of the electors of the State voting upon the question, increase, diminish, or otherwise alter the limits of the State, upon such terms and conditions as may be agreed on, and may, with the like consent, make provision respecting the effect and operation of any increase or diminution or alteration of territory in relation to any State affected.”

Page 378 of Quick and Garran’s Annotated constitution of the Australian Commonwealth:

Accordingly, it is possible for the borders of a State to be altered by Commonwealth legislation enacted under s 123 which has been approved by both that State’s Parliament and by a referendum of that State’s electorate. Where the alteration affects the borders of more than one State, then the requisite approvals will be required from all affected States.

Section 121 – New States may be admitted or established –

“The Parliament may admit to the Commonwealth or establish new States, and may upon such admission or establishment make or impose such terms and conditions, including the extent of representation in either House of the Parliament, as it thinks fit.” 5

Extract from the Public Lecture Series of the High Court of Australia. Dr Gerard Carney. The Story behind the Land Borders of the Australian States – A Legal and Historical Overview (10 April 2013): 6

“Writing in 1900, Quick & Garran (at 975) considered the requirement of electoral approval as an “extraordinary limitation” on the power of State Parliaments. This additional approval had been inserted into clause 123 subsequent to the Convention Debates, in response to the failure of the Convention Bill to be approved by the requisite majority in NSW. Today, referendum approval for any alteration in the State borders seems entirely appropriate and justified.

However the late inclusion of State electoral approval in the drafting of s 123, creates difficulty with ss 111, 121 and 124 of the Constitution. Section 111 enables a State Parliament to surrender part of its territory to the Commonwealth. Section 121 enables the Commonwealth Parliament to establish new States, which by s 124, can occur by an existing State giving up part of its territory to form a new State, or by the union of two or more States or parts thereof. In each of these circumstances, State borders are likely to change, but only the consent of the relevant State Parliament is expressly required.

Hence the issue: whether s 123 applies in each of these circumstances to require referendum approval? Not surprisingly, Quick & Garran argue against this on the basis that each of the specific powers in ss 111, 121 and 124 should not be read down by s 123. (The NT was surrendered by SA to the Cth under s 111, approved in Paterson v O’Brien (1977) 138 CLR 276 without any SA or NT referendum.) While constitutional arguments can be mounted each way on this issue, I suggest that each of the State electorates in the 21st century would expect their approval to be sought before the borders of their State were altered in any respect.”

Page 378-379 of Quick and Garran’s Annotated constitution of the Australian Commonwealth: 7