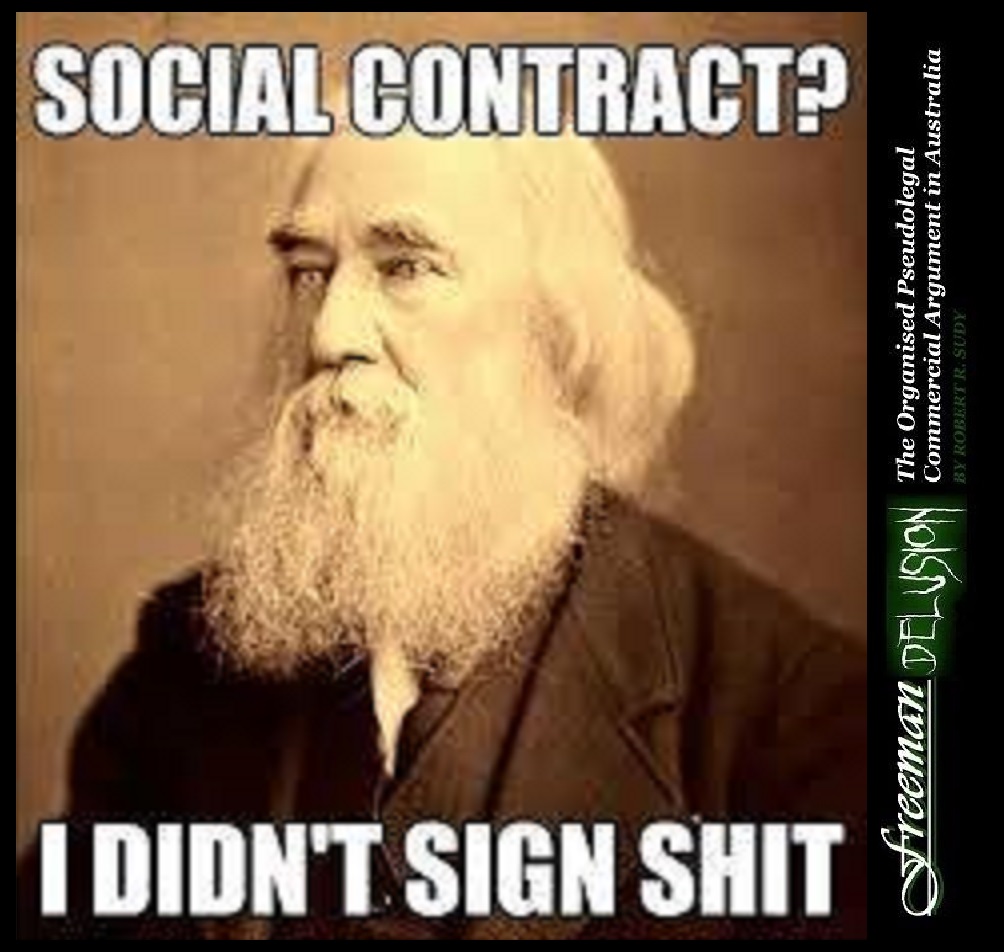 “The question i have is simple, who has the right to use fear threats and intimidation to force their belief on me? That question had me charged for harassing the police, yes I called and asked them many times. The question applies to anyone, as the police are just man/woman in a costume acting on a belief. “

No it doesn’t necessarily apply to anyone. If you were talking about natural rights, which are unlimited, then yes definitely. Such natural rights include your “right” to kill him and enslave his family.

But visa versa, he has more than just the right to “intimidate” you under natural law, he has the right to beat you to a bloody pulp, kill you, and enslave your family. As John Locke has well observed centuries ago, where there is no law, there is no freedom.

But in a society we have what is commonly called the social contract, in which the individual consents, either explicitly or tacitly, to surrender some of their freedoms and submit to the authority of the ruler or magistrate (or to the decision of a majority), in exchange for protection of their remaining rights, and in order to exist in that society harmoniously.

“If man were to live in a state of nature, unconnected with other individuals, there would be no occasion for any other laws, than the law of nature, and the law of God. Neither could any other law possibly exist: for a law always supposes some superior who is to make it; and in a state of nature we are all equal, without any other superior but him who is the author of our being. But man was formed for society; and, as is demonstrated by the writers on this subject, is neither capable of living alone, nor indeed has the courage to do it.” – Sir William Blackstone 1

In both moral and political philosophy, the social contract is a theory or model that originated during the Age of Enlightenment. Writers such as John Locke, Immanuel Kant, and Jean-Jacques Rousseau 2 first mentioned it, and it became the basis for all the democratic systems that exist today, including “consent of the governed” in the US Declaration of Independence. The social contract concerns the origin of society and the legitimacy of the authority of the state over the individual.

Also in Vattel’s “Law of Nations”, 3 which became the basis for international law…

§ 1. Of the state, and of sovereignty: A NATION or a state is, as has been said at the beginning of this work, a body politic, or a society of men united together for the purpose of promoting their mutual safety and advantage by their combined strength. From the very design that induces a number of men to form a society which has its common interests, and which is to act in concert, it is necessary that there should be established a Public Authority, to order and direct what is to be done by each in relation to the end of the association. This political authority is the Sovereignty; and he or they who are invested with it are the Sovereign.

§ 2. Authority of the body politic over the members: It is evident, that, by the very act of the civil or political association, each citizen subjects himself to the authority of the entire body, in every thing that relates to the common welfare. The authority of all over each member, therefore, essentially belongs to the body politic, or state; but the exercise of that authority may be placed in different hands, according as the society may have ordained.”

So ultimately, natural rights are not rights that one can expect a court to uphold, but only rights that remain, the rights that exist in law, usually called ones “civil rights”. In this understanding, the rights one has are found within the provisions of law, based in the constitution of a nation.

In 1765, William Blackstone wrote “Commentaries on the Laws of England”: 4

“This may lead us into a short inquiry concerning the nature of society and civil government; and the natural, inherent right that belongs to the sovereignty of a state, wherever that sovereignty be lodged, of making and enforcing laws. The law of the land depends not upon the arbitrary will of any judge; but is permanent, fixed, and unchangeable, unless by authority of parliament…. Not only the substantial part, or judicial decisions, of the law, but also the formal part, or method of proceeding, cannot be altered but by parliament.”

“It does not rest upon judicial pronouncements to accord, or withhold, recognition of the law in question by reference to the judge’s own notions of fundamental rights, apart from those constitutionally established.”

“Subject to any constitutional invalidity, the judge has no authority to ignore or frustrate the commands of the lawmaker. To do so would be to abuse judicial power, not to exercise it.”

So returning to your original question, the police, and the magistrates, are acting under statutory authority, not their own authority, and not because of their own belief. The inherent rights that belong to the state, and the sovereignty it represents, is the basis of this authority according to the rule of law.

Their right therefore, to use force to impose laws, and arrest people, and otherwise act within powers allocated by the states Police Powers and Responsibilities Act, is not something they get from themselves, but from the governing body, which is in turn duly elected by the people. Likewise, whether or not I individually “believe” in authority, is irrelevant because it doesn’t alter the constitutional arrangements in place. The police will still act according to their statutory powers, as the rule of law dictates.

Similarly, the courts and the parliaments:

I’d agree, as Hobbes had to concede during the Age of Enlightenment and the debates between him and Locke regarding the social contract, that fear is the only reason people obey the law. But this is not something that will assist anyone in a court.

So ultimately, the short answer to your posted question, in context, according to law, is:

Yes, the police DO have the statutory and constitutional “RIGHT” to use “fear, threats and intimidation” to force obedience to the laws issued by a parliament. Not only a right, but a duty to do so.

However, if it is anyone else, or if police are acting outside of their statutory powers, they do not have that right.

A good example of this would be Plenty v Dillon (1991) 98 ALR 353, 8 where Officer Dillon trespassed on Mr. Plenty’s property to serve a summons, after implied consent had been revoked, (so therefore outside his statutory powers) and refusing to leave, Plenty defended his rights by smashing Dillon in the head with a 4 x 2. After the Assault Police charges that followed, Plenty took the matter to the High Court and won. It was found Dillon could be treated like any other trespasser, since he had no statutory powers to be there.