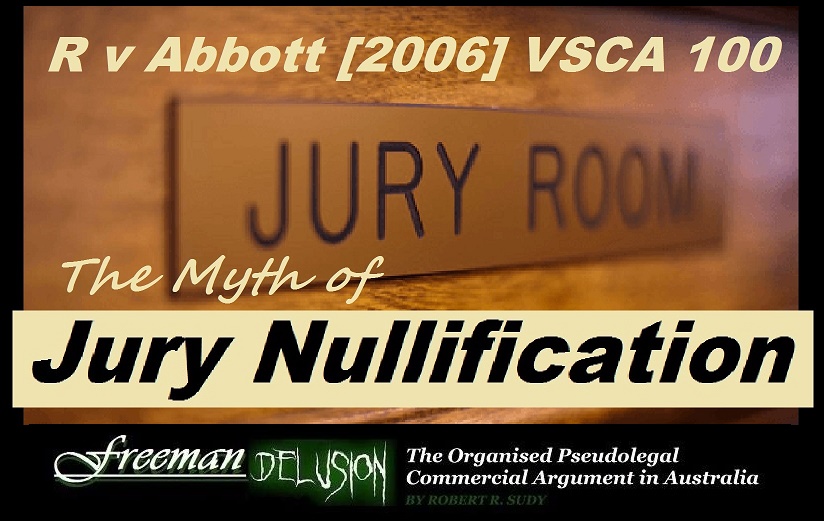 “The applicant’s concept of nullification is also said to entitle a jury to return a verdict of not guilty notwithstanding that they are satisfied that a breach of the law has been committed if the jury thinks the law unjust. The applicant contends that the trial judge in the present case was obliged to tell the jury that they could treat s.21A of the Act thus.

“It is recognised that juries may deliver merciful verdicts.  .. It is another matter altogether for a jury to determine which of the laws of the land are to be enforced.”

The trial judge was under no duty to instruct the jury that they could return a verdict of not guilty if they thought s.21A of the Act or its application in this case was unjust. Indeed, he would have erred had he done so.” 1

A jury cannot find someone not guilty on some sort of moral or ethical grounds when there is sufficient evidence to find them guilty of the charge. They are always instructed by the trial judge to base their findings in accordance with court procedure and evidence, strictly applicable to the particular charge, not their own sense of moral judgment. If a member of a jury refuses to comply, they are subsequently dismissed and banned for life from jury duty. If the whole jury refuses to comply with the court procedure, the judge will simply dismiss the whole jury and have a retrial. The associated legislation is not on trial, the defendant is. Beyond the question of its constitutionality, court is not the place to change any law in this country. Similarly judges in summary convictions matters, cannot grant an alleged right that has no constitutional basis even if they think it is just or right.

“…subject to any constitutional invalidity, the judge has no authority to ignore or frustrate the commands of the lawmaker. To do so would be to abuse judicial power, not to exercise it.”

“…the duty [of a court] of obedience to a law made by a Parliament of a State derives from the observance of parliamentary procedures and the conformity of the resulting law with State and federal Constitutions. It does not rest upon judicial pronouncements to accord, or withhold, recognition of the law in question by reference to the judge’s own notions of fundamental rights, apart from those constitutionally established.” – Durham Holdings Pty Ltd v New South Wales (1999) 47 NSWLR 340 2

Convicted of jury tampering after distributing jury nullification pamphlets on a sidewalk in front of a Michigan courthouse, District Judge Kimberly Booher ordered Keith Wood, a former pastor, to serve eight weekends in jail, six months of probation and fines. 4

“He’s going straight to jail today,” Booher said, according to WMXI. Wood was arrested in 2015 after handing out pamphlets from the Fully Informed Jury Association (FIJA) entitled “Your Jury Rights: True or False?’’ while standing on a public sidewalk in front of a courthouse in Big Rapids. Prosecutors argued that Wood was trying to influence potential jurors before they heard a case against Andy Yoder, an Amish man who was accused of draining a wetland that was on his property. Wood said he did not know Yoder, and he only wanted to inform potential jurors that they had the right to vote their conscience over the law.

Attempting to influence a jury, according to Michigan law, involves someone who “willfully attempts to influence the decision of a juror in any case by argument or persuasion, other than as part of the proceedings in open court in the trial of the case.”