Section 3 of the Commonwealth Constitution states: 1

There shall be payable to the Queen out of the Consolidated Revenue fund of the Commonwealth, for the salary of the Governor‑General, an annual sum which, until the Parliament otherwise provides, shall be ten thousand pounds. The salary of a Governor‑General shall not be altered during his continuance in office.”

The salary remained unchanged at £10,000 until the introduction of decimal currency in Australia in 1966 when it became A$20,000 and remained unchanged until 1974. The 1st Governor-General, Lord Hopetoun, received no allowance for maintaining Government Houses in Melbourne and Sydney nor for staff, travel or other expenses. Instead the Governor-General was required to meet these from the fixed salary. The 2nd Governor-General, Baron Tennyson fared slightly better, with an allowance for the operation of Government House in Melbourne and Sydney, and the Official Secretary to the Governor-General was paid by the Australian government. The Governor-General was required to meet staff salaries and some household expenses from their salary. The requirement to meet staff salaries continued until the retirement of the 12th Governor-General, Sir William McKell, with half his salary going on “staff sustenance”. The contribution to household expenses continued until the retirement of the 17th Governor General, Sir Paul Hasluck.

Section 3 of the Commonwealth Constitution entrusted to the Federal Parliament to “otherwise provide” for the salary amount. They did so before the appointment of Sir John Kerr as the 18th Governor-General in 1974, increasing the salary to $30,000 with the passing of the Governor‑General Act 1974, 2 and have since set the salary of each incoming Governor-General by amending this Act, consistent with the final paragraph of section 3 of the Commonwealth Constitution. 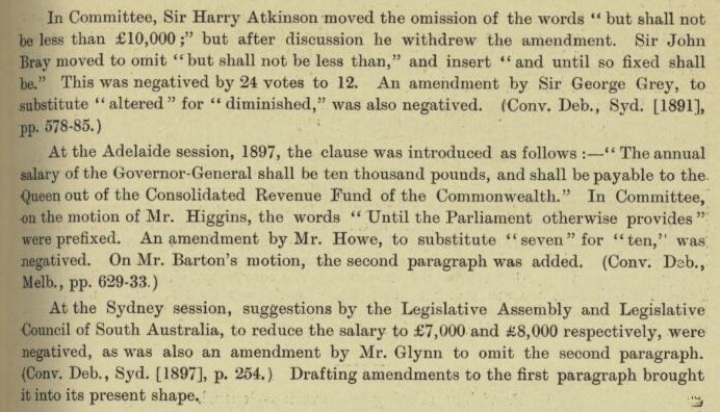 Until 2001, Governors-General did not pay income tax on their salary; this was changed after the Queen agreed to pay tax. Today, the salary is set to be slightly higher than that of the Chief Justice of the High Court, over a five-year period.

Like all the other sections of the Commonwealth Constitution that state “until the Parliament otherwise provides” the text of this provision remains completely unaltered. This may cause confusion to some not familiar with the subsequent enactments, but it is nevertheless consistent with the Constitution. The Parliament is empowered to create legislation “otherwise providing” for the subject matter, but the alteration of the text of the Commonwealth Constitution requires a referendum under section 128.

Pounds are no longer in existence as a currency in Australia. I believe it was Galdron J who made the very good point that the Constitution should be read as if it is being read for the very first time, and to apply a modern meaning. As Windeyer J noted in Ex parte Professional Engineers’ Association (1959) 107 CLR 208 at 267: “Law is to be accommodated to changing facts…” 5 Following the constitutional technique which has been approved in the Engineers Case (1920) 28 CLR 129, 6 plain English should be used in interpretation. It is also important to use connotation rather than denotation (See Engineers at 142-3 and 151; and also see Grain Pool of Western Australia v Commonwealth (2000) 202 CLR 479 at 493). 7

In Walter v Mackay Regional Council [2015] FCCA 351, (At 5) 8 David Walter argued unsuccessfully during bankruptcy proceedings that legislation passed in Australia since 1966 is unconstitutional because it has been signed by Governor Generals who were paid in dollars, not pounds as specified by the constitution.

Peter Gargan argued the same point to press the former officer’s case in a letter to the then prime minister, 9 Malcolm Turnbull, in April 2016. He urged Turnbull to call a “referendum to normalise the currency” as “no legislation since 1966 has been legitimately approved by any Governor General because none of them have been paid in legitimate currency”. He also wrote to a lawyer involved in ongoing bankruptcy proceedings against Walter to upbraid him for not engaging with issues he was raising, including “currency fraud”.

There have been a number of other litigants who raised similar currency arguments before the courts, including Leonard Clampett and Brian Fyffe. (See Clampett v Hill [2007] QCA 394, Clampett v Kerslake (Electoral Commissioner of Queensland) [2009] QCA 104, Clampett v Magistrate Cornack [2012] QSC 123, and Fyffe v State of Victoria [2000] HCA 31.) None of these cases have ever been successful, as the matter was already determined prior, in Allan Skyring’s cases. (See Re Skyring’s Application (No 2) (1985) 59 ALJR 561, and Re Skyring [2013] QSC 197.) See article on “Cash is no good for debts! – section 115” and under the Tag “The Currency Argument“.